In fashion news this month, #4 has started to wear a woollen hat at all times, indoors, outside, and in all weathers. Under close parental questioning, he tells us that he is planning to ‘grow his hair out’. This concerns me, not least as the thought of long hair brings back associations of hippies and prog-rock, neither of which are to be trusted, in my humble, and vocal parental, opinion.

Given that #4 is the last remaining bubba in the house, he is being treated as single child, and we’ve had to adjust parenting accordingly. Sometimes we even try and reason with him. Irritatingly, he reasons back:

Mrs E ‘But what will happen when you need to apply for your driving licence?’

Incidentally, not the first time we’ve run into legislative challenges with him and hats. We had to go over to France in the summer of 2002, and had arranged rather optimistically to take all the family, with #4 having arrived only a month before. This meant that I had to take him to get a passport sorted out when he was 3 days old. Knowing that he would struggle to remain upright in a photo booth (not to mention operating it), I laid him on the bed in a babygro and fetching beanie cap, took his picture, had it printed, got it witnessed, and hightailed it down to the post office to have all the papers approved.

‘Sorry Sir, we can’t use this one, your son is wearing a hat’

‘Sorry, but the only way we can allow it is if he’s wearing the hat for religious purposes…’

I seriously gave that consideration, but then thought about the slight disagreements we might have if we lost his hat on holiday and had to leave him in Dover. Not to mention whether the hat would really suit him in ten years time. Although reflecting on it now, we could have saved a fortune over the years in headgear.

Back to the conversation then, and we all agree that this interim process of growing the hair out may well be the worst bit, hence the hat. The problem with this stage is that it kind of goes through a wild bedhead/mullet/fluffball stage, managing to be several unpleasant styles all at once. I can’t quite put my finger on it, until #2 pops round one evening, and surveys the situation.

‘He looks a bit of a hillbilly’

Which is pretty spot on. I mention to Mrs E that I half expect him to be wearing dungarees and playing guitar next, and to my surprise a couple of days later, wander up the garden to find him doing both of those things.

The other slight discomfort I have around this whole growing thing goes back to the very idea that men should have anything approaching a ‘style’ in relation to their hair. I appreciate that there’s a danger that I slip into the middle aged outrage that I’ve been trying to avoid for most of my life (although I found myself enthusiastically singing along to George Thorogood’s ‘Get a haircut and a proper job’ the other day), but while men’s hair is concerned, I reserve the right to be a bit Kim Jong Il. Which means it’s all a bit awkward at Emu Towers at the moment.

Kim Jong Il famously only allowed 15 haircuts on his watch (well, 16 if you included his own, which no one else could have), and there wasn’t actually a great deal to choose between any of them: 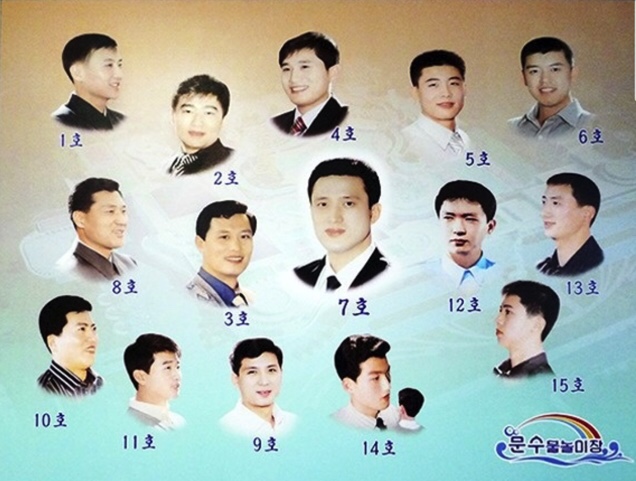 Most of my hair cuts ever since I can remember, have been in either style 2 or 5 from the poster above.

I’ve stepped away from the North Korea barber book only a couple of times. Before austerity was all the rage round these parts, and early in our marriage, Mrs E decided to save the £3 that I frittered away every month on haircuts by buying some clippers which would ‘literally pay for themselves in a year’. The cutting normally took place on a Friday night, and she had to have a couple of drinks to steady her nerves. As a result, I had a good couple of years of the worst haircuts imaginable, while she tried, and failed, to master the art of fading from a number 1 to a number 4. Had I travelled to North Korea around 1985, I would almost certainly been convicted of crimes against the state.

The other time was in the early eighties, when I mistakenly assumed that the ideal cut for a wannabe blues singer was a flat top. A flat top is very much like a crew cut, but with the top bit, well, flat. Draw a line on top of #15 above if you want to get the general idea. In order to maintain the cut, it needs to be trimmed once a week, otherwise it will start getting a bit messy, so it’s important to find a barber who a) can cut an accurate flat top and is b) cheap.

Fortunately, round the corner from where I lived at the time was Ted (known, unsurprisingly, as ‘Ted the Head’), who ran a barbers shop from the front room of his house. There was one chair, next to which was normally a assortment of kids bikes, lawn mowers and hifi components that he would offer to sell you as part of the barbering transaction. Ted had a range of two cuts – short back and sides, and flat top, which he’d learnt by cutting the hair of US airman during the war. To cut a flat top, you need a client who could keep his head completely still, a flat top comb, which laid on top of the hair, a set of clippers, and two very steady hands. Ted was getting on a bit when I met him, and he couldn’t really manage even one steady hand, so the cuts were a bit hit and miss, but we got there in the end.

A well cut flat top is a thing of wonder though, and quite the style for a rock and roll weekend. I decided to move on partly for maintenance reasons, and partly as during a particularly cold and rainy walk to work on winter morning, I found that a small sheet of ice had formed on top of my head. The next haircut would have to be able to accommodate some sort of hat.

Which brings us neatly back to #4. I guess things will work out in the end. He’ll do his own thing, with or without a hat. And things could be worse; he could have been born 40 years earlier and be trying to fit in with the fashion then….