In our last exciting instalment, we left Solomon, a sweet adolescent dog (regarded by Mrs E very much as her fifth son, and treated with more devotion than any of the previous four), nervously anticipating a trip to the vets to remove any opportunities to create little Solomons in the future.

As we could easily have predicted, he wasn’t keen on the exercise at all, and started whimpering softly as the car pulled in to the vets, the scene of previous anti-emetics and painful injections. Mournfully he looked up at Mrs E, as if to say “Why Me?”. Mrs E, however, was probably thinking that if the exercise went well, she might investigate a similar exercise on certain of Solomon’s four predecessors.

We picked him up later that day, and he was more pleased to see us than, say, a dog with two tails. There was also a soldierly air about him that said ‘Oh this old scar, don’t worry, it’s not bothering me at all’. He was a bit like my friend M, who is a carrot farmer, and had a vasectomy scheduled one morning during harvest, so made it very clear that he needed to be right back on the tractor in the afternoon. Which he was.

However, Norfolk dogs need to be treated with a certain more care than Norfolk farmers, it would appear, and so Solomon was restricted to lead walks for a week so as to avoid pulling his stitches out, something which he found slightly irritating. And even more irritating when, after a couple of these, Luna found that she could wind him up by running full pelt at him from behind, bumping into him. then sprinting off into the distance. It reminded me very much of David Gower in a biplane at a test match, or, if early 1990’s cricket references aren’t your kind of thing, Dawn French in ‘Whatever happened to Baby Dawn’ (specifically around 4:50 on this clip, but if you’ve not seen this before, do watch the whole thing, at least three times) :

After a week of this, Solomon and Mrs E had had quite enough (although I think Luna could have kept going happily for a couple more months), and he was let off the lead, with no negative issues for either scars or stitches. At which point, on pretty much every walk, Luna spent a lot of time barking at him to calm down.

Some months ago, Mrs E told me that she would definitely need a final celebration of her special birthday year, which I dutifully booked. I opted for a romantic weekend, a mere skip and a jump from the Peak District hotel where we spent our wedding night (an evening, that, for reasons I’ll tell you about another time, was spent with Emlyn Hughes, and which, as a consequence, is marred in my memory by a ridiculously voice calling out “3:1! 3:1 we won that day” at a pitch that Solomon would have heard even more acutely than we did). However, the romance of the birthday break was soon to dissipate, as it became clear that this was primarily a weekend for Solomon to recuperate, and start his genital-free life anew.

Fortunately, the romantic cottage we’d booked was declared ‘dog friendly’ on the web, we quickly ordered a book called something like ‘Suitable Walks for Freshly Neutered Dogs in Derbyshire’, and set off for a gentle adventure.

A couple of weeks earlier, I’d spent some time in the company of an estate agent, with a challenging taste in business wear and a generous weekly allowance for hair product, who told me that the estate agent’s best friend was the wide angle lens. I was reminded of this conversation as we walked into the cottage, and soon found the ground floor fully occupied simply by closing the front door. There were quite a few sideways and backwards moves required in order to navigate the process of preparing a meal, not entirely helped by the dogs not having a reverse gear. This picture will give you an idea of the starting position.

Anyway, we were met by the very friendly, and fortunately, quite thin, cottage owner, who wedged her way into the porch to give us some advice, which included the news that the dogs would not be allowed upstairs, despite the stairs being completely open. With a nimbleness afforded only by many years of yoga and aerobics classes, Mrs E manoeuvred her way from position 3 to 12, with very little injury to either dog, and made it clear to our hostess (now resident at position 14), that there was no way that her little darlings were going to be kept downstairs in a strange house, no matter how cosy. Fortunately, a major diplomatic incident was avoided, as our hostess squeezed across to position 15, inspected the dogs, and declared (seriously) that they had short enough hair for this not to be an issue.

Having scored the first moral victory of the day, we all trooped upstairs, to investigate the ‘compact and bijou’ bedroom with some interest, finding just about enough room for two carefully folded dogs on my side of the bed.

Unfortunately, this arrangement was to spell the end of romance and very much the start of pampered recuperation. Solomon’s recent operation had, for some reason, altered his body clock to be wide awake at odd hours of the night. It had also given him a healthy appetite, and interestingly, an enthusiasm for all sorts of excrement littered across the Derbyshire countryside. He had a particular penchant for Sheep shit, but was also partial to a bit of Cow and Horse. As a result, his breath absolutely stank. He is probably oblivious to a combination of halitosis, farm animal excrement and gingivitis, but it’s hard to ignore when it’s delivered at 2 in the morning directly onto your mouth. Telling him to lay down and turning your back doesn’t really work either, unless your idea of a wake-up call is being rimmed by an enthusiastic puppy five minutes later. I mentioned this to Mrs E, who made it clear that her empathies were all with the dog. Anyway, all things considered, I prefer a snooze button.

Anyway, Solomon certainly seemed to have received the message that this holiday was for him, and him alone, and subsequently lorded it over all and sundry. I suspect he’s over compensating, as, if anything, his chest is puffed up even higher than ever, but at least he’s stopped humping animate and inanimate objects without warning. He seems pretty relaxed, if his sleeping position is anything to go by: 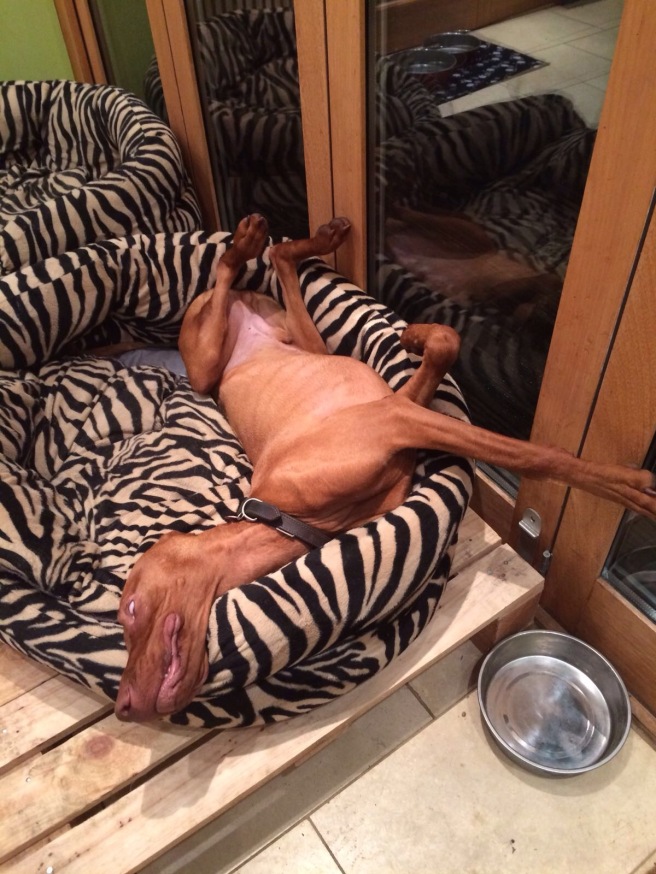 And if he winds me up, I just whisper ‘Jaffa’ in his ear. He doesn’t necessarily understand, as, being Hungarian, the finer points of British slang can be lost on him, but it makes me feel much better.