It seems a long time ago, but I guess it was when my parents were about the age I am now, that they spent a fair bit of time trying out new stuff. One of their adventures was into the world of antiques and furniture restoration, which is where our story of blasphemy begins, in a very very roundabout way.

They were pretty good at what they did, which was mainly old chairs – my Dad had enough patience to painstakingly strip away layers from the wooden bits, and my Mum learnt how to weave the canework onto the seats. She got so good that she started advertising her services in the local paper, and was quite taken aback when the responses to ‘Caning by Annette’ seemed to be after, well, a specialism that she couldn’t offer.

To get a ready supply old furniture, they started to visit auction houses, and would return with all manner of knackered wooden chairs, plus anything else that took their fancy. And, unfortunately for one of their three offspring, one week, what they fancied was a painting called ‘The Watercart’.

‘The Watercart’ is a painting that pretty much defies description – you really need to witness it for yourself to understand just how awful it is. It manages to combine all of the saccharine aspects of Constable’s early work with the brushwork of a deranged Broadmoor patient. It’s about 2 feet wide, meaning that it would stand out on any wall, and is complemented by an ugly frame that is probably worth slightly more than the painting itself. Around 50p, at last estimate.

I think they realised their mistake fairly early on, and my sister, who recently described their marriage as ’60 years of bickering and jokes’, was particularly vociferous in her criticism. We could tell that matters were not going to end well when my Mum starting blaming my Dad for buying the painting in the first place, then, slightly more quietly, my Dad would suggest it was all her fault. Matters went from bad to worse, and the painting was removed from public view, and then my Mum came up with her ingenious scheme to use the situation to punish her own children.

I was probably about 30 when The Watercart entered my life, and I think I’d hoped by then that parental punishments might have become a thing of the past. Just goes to show that you should never underestimate your parents; a lesson that I’m very keen on passing on to my own kids.

It is an unwritten rule that the painting will need to be displayed prominently when it is passed on, to make it a real and constant punishment, and I like to think that it will be used extensively to penalise future generations. I am very much hoping that neither I nor any of my children (rules have recently been amended to allow the punishment to skip a generation direct to a least-favoured grandchild) will be in the firing line.

Most recently the will has been pointed at my sister, for some imagined slight, possibly letting slip that the taste of this year’s chutney wasn’t quite as good as the year before. However, it may now be heading in the direction of my brother, who I believe was the force behind an official letter from Buckingham Palace congratulating my parents on their 60 years of marriage. My father, who has been a die-hard republican all of his life, is a little perturbed that HM has been writing to him and my mum personally, and would probably see any individual responsible as deserving a bit of a Watercart discussion.

There’s a reason for telling you all of this, and it’s really as a warning to my own family that I may well be about repoint The Watercart in my own general direction. Because this blog is about swearing, and my Mum’s views on swearing are very traditional. She will not approve.

One of the first times I can remember my Mum getting cross with me was when I was about eight, in the garden, I dropped something on my foot and exclaimed ‘Bloody Hell’. She went absolutely bananas, not just because I’d cursed in front of her, but also in front of my grandmother, who was actually looking on with what I thought was quiet approval.

In those days, ‘Bloody Hell’ was pretty serious stuff. On a one to ten scale, it was probably only a five or six, at about the same level as ‘’Cor Blimey’, but it was as far as any right thinking child would go. Just below would be ‘Flipping Heck’ or ‘Flaming Hell’. Just above was ‘Bastard’, ‘Bugger’ and ‘Shit’, and  beyond that were the words that you knew, but would never use, except perhaps to look up in dictionaries or to whisper to yourself at night, just to understand what they sounded like.

Remember I’m talking about the late 1960’s here, this was a fair while before the Sex Pistols upset Bill Grundy, and across the land people kicked in the front of their TV sets after Steve Jones used the F word (#9 on our 1-10 list). Next morning, my paper round took much longer than usual, as, wide-eyed, I read and re-read the headlines: 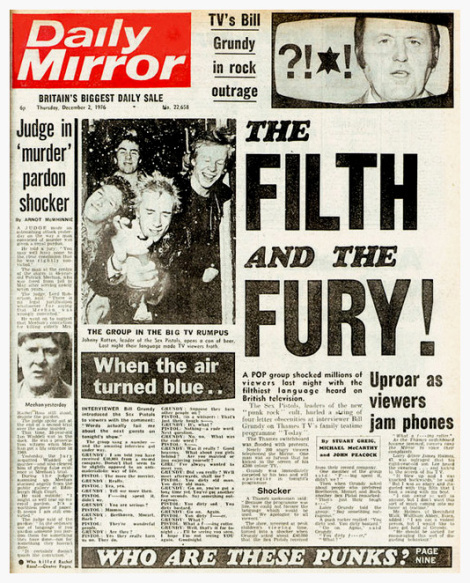 Well, this was forty years ago, and the world seems to have relaxed a bit around the whole blasphemy malarkey. I would struggle these days to upset anyone, even my mother, by saying ‘bloody hell’ while, for example, hammering my own thumb. But at number 9 & 10 on our profanity index, there’s still an opportunity to offend.

Unless you’ve spent the last five months working on a building site which, as it happens, I have.

And on a building site, there’s a whole different way of talking, where F&C words are just thrown about like confetti, and, as a result, they don’t really mean anything. It’s a bit like wearing your winter coat in September, when you know it’s going to get colder; there’s nowhere really to go. Where you do need the equivalent of another layer of clothing in November, the F&C gets repeated and repeated, and used in innovative ways, just to get the point across.

To illustrate how it works, to avoid any undue distress, and to allow this blog to creep through some security filters, let’s carry on with a bit of word substitution. For the F word, we need a word that works as a noun, a verb and an exclamation, and describes something fairly old and knackered, with sexual overtones. So we’re going to use the word Stringfellow. For the C word, we need to substitute a word that means something deeply unpleasant and incredibly distasteful. So we’re going to use the word Trump.

As an example, when I got to work last Monday morning, these are the words that greeted me:

Hopefully you get the gist. To illustrate how to use our words on site, the Emu will now be submitting the following definition to the Oxford English Dictionary (Stringfellowing Builder’s Edition)

For extra emphasis, trump can be used as a verb, for example:

If you want further examples, just give me a call. I’ll put you on speakerphone and just carry on about my business.

And mother, if you’ve read this far, I’m really really sorry. I’m putting a hook in the wall this evening.